Vivo S15 Pro with Snapdragon 870 SoC, 12GB RAM Spotted on Geekbench Ahead of May 19 Launch Ahead of the official launch, the S15 Pro has visited the Geekbench website. The listing on Geekbench reveals some key performance unit details of the upcoming Vivo smartphone. Let’s take a look at the Vivo S15 Pro specifications, features and other details known so far.

Vivo S15 Pro is set to make its debut in China on May 19. The phone is listed on Geekbench ahead of its official launch in the country. As per the listing, the device has the model number V2203A. The benchmark website reveals that the phone draws power from a chipset codenamed Kona, which is the Snapdragon 870 SoC. The processor is paired with an Adreno 650 GPU for graphics.

Vivo’s S15 Pro scored 967 and 3011 in Geekbench’s single-core and multi-core tests. The variant listed on Geekbench has 12GB of RAM. We can expect the phone to come with 256GB of internal storage. The device could also be launched with 8GB of RAM in China. Lastly, the benchmark website reveals that the S15 Pro runs Android 12 out of the box. For the Chinese market, the phone could run Origin OS Ocean on top of Android. If the phone does launch outside China, it is likely to boot Funtouch OS 12 out of the box. 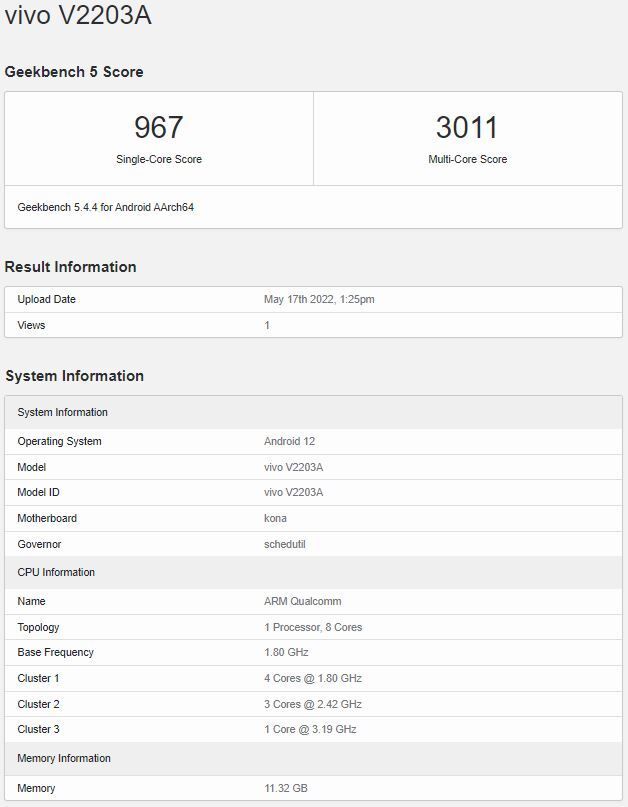 Other details of the phone have leaked in the past. It will sport a 6.62-inch Full HD+ AMOLED display with a 120Hz refresh rate support. There will be a hole-punch cutout at the top for the front camera. On the back, there is a triple-camera setup. We can expect the Pro model to feature a 108MP main camera sensor. Other details remain unknown. We will share more details of the phone’s specs and features once available.